In February of 2013, Big Brand Media came to know Madison Advertising who at the time was selling print media creative and brand consulting for Saffron in Dubai .  I know this because the CEO of Madison, Mr. Tarek Ghannam shared office space with us at  the H Business tower on Shiekh Zayed road, in Dubai.

As a tech entrepreneur with Silicon valley experience I have always believed in having open and constructive business relationships with partners and so in this spirit my team and I introduced what we did, which was to create consumer and business centric video content, with our webTV platform eZeLiving.  Mr. Ghannam immediately showed interest and wanted to become our reseller for a 30% revenue share.

Knowing full well that BBM and it’s platform eZeLiving.com was focused on lifestyle segments such as food, health, fashion, travel, fitness, automotive, etc and our core strength being in video production at an unbeatable price point, Mr. Ghannam started asking us to make  creative content so he could pitch to his clients such as Nestle and Masafi.  Our first request from him was to create a video for NIDO, and we did.   Here is the webcast.

After his meeting with NIDO, an email came to us saying that Nestle loved our creative content and wanted to work with us.  But it never happened.

A second creative idea that we shared with Mr. Ghannam was when we introduced our new show in March which was 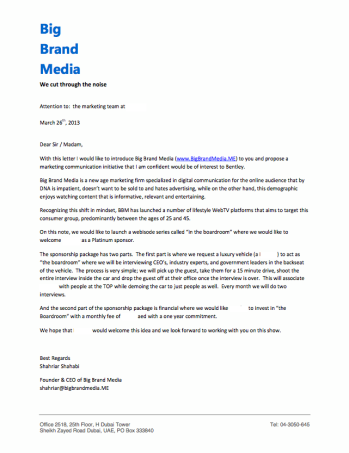 a modification of our original idea that we had thought of back in January of 2013.  The premise of the show was to  have CEO’s sit in the backseat of a luxury car as we conducted an interview.  The name of the show that we had given the webisode series was “in the boardroom”.  Here is where the idea originated from again from our side and NOT his.

We introduced this show to Mr. Ghannam after BBMs correspondence with Bentley who also had their representative office on the same floor.   He then took action and introduced us to Jaguar / Range rover.

On April 7th we had the meeting with Jaguar not knowing that Mr. Ghannam had set up the meeting as Madison.

During our relationship we shared a number of show ideas some that were active, like our “Good Doctors” and others in the pipelines.

By April, three months into our business relationship none of the client’s that he had introduced turned in to business deals, only later for us to find out why.  Mr. Ghannam had not mentioned a word that any of these ideas, platforms and services were the intellectual property of Big Brand Media and that he was working in partnership with us to promote our creative IP.

To our surprise we later realized in a tweet that he had closed these deals under his own name leaving the real creators of these initiatives out to dry.  What was most shocking to us was that he even had the audacity to take OUR BRAND “In the boardroom” and use it for Jaguar.    We confronted Jaguar only to be told that they had closed the deal with Madison and that if we had issues we should take it up with them.

Discussing the issue with a law firm in Dubai, we were advised to put an injunction on any trademark that Madison could have on this name from Abu Dhabi.  We are still thinking about it.

But here is the real question.  If these ideas, shows, business model all belonged to Madison then  why were we asked 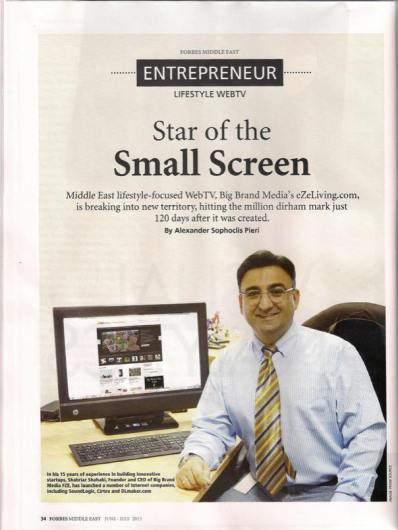 to come to meetings with him and WHY was Mr. Ghannam on www.eZeLiving.com and WHY are their emails that state he was reselling our product and that he expressed interest to take an equity stake in our company.   WHY, do we have over 1500 pieces of web content with over 3 million video views where he has none before meeting us (HE HAS NO DIGITAL FOOTPRINT before meeting us), why did FORBES middle east magazine call us “the star of the small screen” (July Issue 2013), Why did the National.ae headline the founder of BBM and the company as “shaking up online ad world” (August 19th 2013)

The truth is that after having full access to BBM, our business model, pricing model, nature of shows, format of filming and upon securing deals for himself using our expertise, Mr. Ghannam took something that was not rightfully his and immediately changed his company website to incorporate a lot of our terminology such as customer centric content, lifestyle focused content, webisode series, storytelling and positioned his firm as a content creator with a business WebTV, and under this pretense, formed a relationship with MediaQuest.

Footnote:  Everything I have said in this article are backed up by published facts and in the form of communique and emails between myself and Mr. Ghannam.  And while in a court of law the truth will side with BBM I don’t think Mr. Ghannam is worth my time to pursue a legal case against him as we have bigger and better things to do as the true originators of creative lifestyle centric content makers on the Web, founded in the UAE, broadcasting for a global world.

A copy of this letter is handed over to Dubai Police with all emails attached to counter Mr. Ghannams baseless claim that we called him names.